Hello! Maybe I will write down one of these recipes ahead of time before saying Oh I'll send you My Recipe Because I Totally Write Them Down and Do Them The Same Every Time.

I used to hate potato salad. I think a lot of people do! At its worst, its basically uncooked potatoes in a slurry of fake mayo and red onions, just some sort of tuberous polar stew. At its best the typical American potato salad is chewy potato bites covered with an almost sweet sauce with bright, popping textures from red onions, carrots and occasionally peas? (blasphemy? you tell me) It's basically cold fries. That's what you're looking for here, texturally and taste-wise. Crunch, potato and mayo.

So with that in mind, FORGET THAT SHIT. That's lame tater salad! TSH. New World can suck my newly accented anoos. Now, ve make a potato salad that will actually taste GOOD. And you will be like. How did I ever eat zis pathetic bullsheiße? Also by the end you vill probably say zis was not zuper German you kind of made zis up but zat's okay its very delizious you are totally a chef ja.

Now, I'm going to give you ze quick recipe, but I want you to listen to what comes after -- your ingredients and method are important, and I will help you. But I don't like to vaste time zo I give you full recipe now. Allow yourself the time to stare at it all and wonder how will this possibly come together in my mouth and know that yes, you will love it. Also you can stop with the accent now. You're just embarrassing everyone.

1 BIG-ASS RED ONION (or a couple medium sized ones), sliced thick, then chopped. Use pinky finger width as a guide (less you're really huge or tiny)

1 Yellow or Red Pepper, diced (Optional -- add this if you don't/cant have bacon/meat, or if you're me. It's delicious too.)

3 cloves garlic (NOT WHOLE BULBS GUYS. Tho you can if you want *shrugasaurus*)

Green Onions, some. Diced. However much you want, tho probably no more than the bundle they come it at the store.

DIJON MUSTARD AND FKIN HELLMANS REAL ASS MAYO. Don't PLAY WITH ME less you bout to make that shit yourself. Which is FINE and I probably have a recipe for that too. Damn.

Some cumin and paprika. For later, baby.

Get the biggest pot and pan you got. If you have some fancy le creuset or Kitchenaid enamel pot/pan or cast iron, that's your bet. A lot of times people have trouble with recipes because we assume a certain size of pot and pan. The heat and time for cooking things depends on the size of your pan and how you're getting heat. If you have a really tiny pan on electric stove as your only option cook all this in batches, saving the bacon grease from each batch of bacon for your veggies, and leave it at a solid medium-medium-low at all times. Things should sizzle rather than just simmer. Seriously tho, go to TJMaxx or whatever nearby and look in their kitchen section. usually some cheaper enamel cookware there (I know it's expensive, but $100 enamel cookware will literally last your entire life unlike that $15 walmart pot you've had to replace three times this year). Enamel and cast iron are your friends. Be one with the kitchen.

WHAT KIND OF POTATOES DID I BUY?? Is this question driving you crazy? I know, some people really care about their taters. But I don't. They're all delicious, so long as you're getting good produce. That generally means organic, but not always. I live in Vancouver BC and we have a lot of greenhouse heirloom non-organic potatoes that are generally small and taste amazing. For this recipe you'd just halve or cube them. Generally though, it's worth it to go for organic potatoes. Non-organic potatoes produced in the US have to sit in a decontamination vault for 3 days after harvesting and if you go inside during that time the residual pesticides in the air will literally kill you.

Now, boil those taters for about 15-20 minutes. More or less depending on the size of your cut. Pay attention, and use a fork to prod them every five minutes after ten; they're done when they feel like poking a piece of strawberry. Kind of soft but still resistant. Drain them and put them in whatever bowl you're going to serve all this shit in. This is now your mixing bowl. Ta dah! fewer dishes.

While the taters are boiling, start cooking that bacon in your pan. When the bacon is crispy on the edges but still chewy (probably 3-5 minutes of cooking), set it aside. If your potatoes are done you can throw the bacon in the bowl with it. After you and your friends snack on too much of it, there'll be the perfect amount for the salad (a pound is actually a bit too much. But otherwise you end up with too little cos fucking bacon man)

Sautee red onion, garlic and pepper (if using) until browned on the edges and slightly soft in bacon fat. Add butter if necessary. (It's probably necessary. Mm butter) If you've got a reasonable size pan and everything fits well in a single, even layer, then MEDIUM-HIGH HEAT for a few minutes, then drop it to LOW for 10-15. Otherwise, finagle. The idea is the same -- high heat to get everything searing and browning, then low heat for a while to draw out the sugars and carmelize everything in that glorious bacon fat.

While THAT is going on, whisk together our sauce. This amount is somewhat personal. Do you want this goopy or a nice covering, almost like a batter? I suggest the latter (haha). Either way, it's 1 part moutard, 1 part mayo. So for this amount we're going to take 1/2 cup mustard, 1/2 cup mayo and our tablespoon of cider vinegar and whisk it all together, along with our salt, pepper, cumin and paprika. You just want a little dash of paprika, but you can put in a lot of cumin. However much you like. This should have a definite bite to it, but don't worry. it will mellow out after being mixed and resting overnight.

Add the cooked veg and bacon to the salad bowl, then add your sauce -- start with half and toss from there. You can always add more in cooking, but you can't really take away. It should be a steaming, brown-yellow mountain of delish.

NOW DON'T EAT IT. This is frankly the ultimate secret to all cooking. LEAVE IT OVERNIGHT IN THE FRIDGE. AT LEAST TWO HOURS GUIS. I call this cold-cooking; you've got all your flavours, but now they need to cook together, to really mix and meld. You'll notice this effect most with soups and sauces, and potato salad is basically a sauce. You've probably tried some while making it, but try it the next day, cold. All those flavours you found yesterday are going to be there, plus some you had no idea could possibly exist. And you'll be like "woah, did i add something extra there?"

You did. It's called love.

(also green onions chopped and sprinkled on top right before you serve. Don't need to have those sitting in there)
Posted by theaugustauthor at Tuesday, May 31, 2016 No comments:

This unit has received a request for a BBQ sauce recipe. In advance of other such requests, I am posting the entire recipe here. This is... MARSICAN SAUCE. Cos it's Red like the Red Planet, and has a shitload of mexican spices in it.

THERE WILL BE NO PICTURES. Pictures are unnecessary and only for you to gaggle and drool. DROOLING IS FORBIDDEN. Until you start making this DELICIOUS SHIT.

HERE ARE YOUR INGREDIENTS (Listed in Freedom Units, because I didn't grow up w/ metric)

Okay. Here's the directions. First, if you want (AND YOU WANT) prepare the MARTIAN DUST, as instructed below. If you are impoverished or otherwise missing ingredients, you will at least want a 1/2 cup of smoked paprika and some cayenne pepper.

TOOLS: a pot. Anything non-reactive, NO TEFLON. I don't trust you guys with that stuff. It's dangerous. Also, a wooden spoon or other wooden implement. (not dong) Also a blender. I have a Kitchenaid hand blender, and I love it more than my left foot. (f u lefty) You already used the knives.

Okay fine, a photo. Here's what it should look like at the end of the day :) 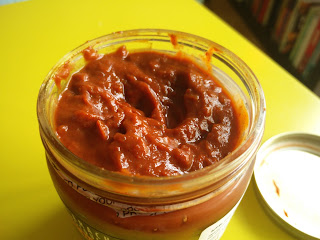 Grab a container. Whatever you're gonna fill with this spice mix. You should probably make it reasonably big, because if you like spicy food, you will want to put this mix on pretty much everything you ever make. I like to use old peanut butter jars and old spice mix containers. Don't throw glass away!

These amounts are just examples, and will make a TON of this spice. You probably want to do half this, but that would have made the fractions intolerable for me. Sorry! Scale up and down, all that matters is ratios. Think "parts" in your head if that's easier.


Put this all together, make sure there's a little room left in the top of whatever container you're using, SEAL THE CONTAINER, and SHAKE! That's it, you've just made what is probably your first Real Spice Mix!(tm) Sniff it, and if it makes you wince and look away, it's good. 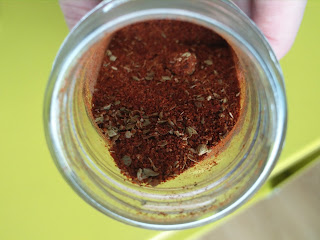 Feel free to play with all of this -- the key base ingredients are the smoked paprika, chile powder and cumin. Another optional ingredient here would be coriander, between 1/2-1 cup. I didn't use that for mine, but you certainly could.

Enjoy cooking! I have a lot more of these, so if people want recipes, I can supply ;)


Posted by theaugustauthor at Thursday, February 25, 2016 No comments: